Good wine gets stashed in the cellar for a few years to age, right?

(I don’t really know, being that I don’t drink it.)

This post has been in my draft folder for nine months. Part of it is anxiety and part of it is that I’ve spent most of the last seven months thinking of nothing but my other novel, so Oscar and company got the short end of the stick despite the fact that the second book has been planned out since last year. It’s still ridiculous no matter how you cut it. The upside, however, is that my cover design skills and comfort level in Photoshop have improved, so you get a much better cover! (I’m not saying it’s spectacular, just that it’s better.) I know, I know, it’s an e-book – but you want it to look halfway decent in Calibre, right? Or is that just me?

I’m sure I’ve said it and implied it, but I’m a chronic pain sufferer. Three years, now. (Nigh on four, says the K. A. of nine months later.) Three years of not non-stop pain, but more pain than not most of if not much of the time. I’ve tried physio and ultrasound therapy and acupuncture and dry needling and occupational therapy (I can do shit, it just hurts) and mindfulness and meditation and weird computer programs and special brain training and … well. My reality is that since things haven’t improved in three years, the chance is small that they’re going to, and I’m facing down a life-long reality of pain. (Pain has allowed me to go out and begin my life, but it’s not easy to look ahead and know that in forty years I’ll still be struggling.) I’m one of the unlucky ones who has no readily-identifiable cause (most likely a combination of various things, but neither one on their own justifies the pain I’m in) and doesn’t fit the diagnostic criteria of any ‘physical’ pain disorder. This doesn’t mean my pain isn’t real. It just means they can’t figure out why my nerves are firing pain signals all the fucking time. Medical science hasn’t caught up to me yet.

It amuses me when people tell me that being diagnosed with a condition is the terrible thing, because for me, it’s the reverse. Being told that I suffer from depression and anxiety – that there is a name and a treatment for my disordered thinking, even if said treatment is complicated, difficult and slow – was a liberation. Diagnosis was the best damn thing to happen to me. It told me I wasn’t stupid or wrong or immature; it just told me that my brain chemicals are a bit fucked up and I’ve got some horribly self-loathing thought-habits in need of work in an appropriate supportive and therapeutic environment. I don’t have that with my pain; ‘pain disorder’ in practice means ‘we know you’re in pain and we don’t fucking know why or what to do about it’, and that’s a hard pill to swallow. Yes, there are diagnoses that carry with them some incredible weight of awfulness and fear if not fatality, but please don’t ever diminish the strength of courage it takes to soldier on with a body that doesn’t work and no clear understanding of why and what to do about it. A life sentence of pain – something I have no choice in – is just that: a life sentence.

(I have gotten pretty damn good at ignoring it, though.)

We don’t value the strength and bravery it takes to face up to chronic pain, to come to terms with pain as a disability; we don’t even acknowledge, most of the time, just how disabling pain is. I’ve had well-meaning, kind people tell me that I might not be ‘disabled enough’ to qualify for disability support at my school because ‘more disabled’ people need what limited support is available  (so very wrong, thankfully). I’m not ‘disabled enough’ to qualify for government support, but I was disabled enough that I spent my days at my old job wondering up and down the aisles, slowly growing ever more crazy from my inability to do anything in a warehouse environment. I’m still disabled enough to have periods of my life where spending five minutes on an email is difficult, and I’m still disabled enough to be working through pain most of the time, and I’m sometimes still disabled enough to suffer the crushing depression that comes when you’ve been in too much pain for too long.

This tug-of-war between chronic pain and depression (where doing things that make me not-depressed lead to pain), between driven passion and less pain, is the beating heart – or one of them – of my novella, Asylum. It’s a story about a chronic pain sufferer trying to live up to the inspirational disability narrative and breaking her body and soul in the attempt – and it’s also about the ways in which people don’t understand, and fail to be helpful in, the management of chronic pain, even when they think they’re being supportive. It’s about pain and depression and just wanting to live like every other able-bodied person, about the pressures of being queer and non-binary, about surviving trauma and being an idealistic soul in a body that grounds you; it’s about how hard this is to come to terms with, and how ugly this life can be when you’re trying to survive it on your own.

I have had it with the depictions of people with mental illness in queer genre fiction as trembling, broken souls who can’t function without the kind and loving support of their non-mentally-ill love interest – as people in need of rescue. I am not this; I am not a weak and helpless thing. I don’t need other people to rescue me, and I have never needed other people to rescue me because I can rescue myself. I am strong, I am a survivor of things – including my pain and my own fucking brain chemistry – that would shatter other people, and I get up every day of my life, face up to a life of pain and anxiety and depression, and go and do many of the things I want to do despite my body and my brain. (Do you know how much I was shaking just to hit the ‘publish’ button on Smashwords? Seriously.) I am amazing, as is everyone else with mental illness. I have accomplished more than many people have without my challenges, and it might be a massive faux pas to admit that myself, but fuck it. It’s true.

I’m tired of the absence of people like me in fictional portrayals of mental illness (and this is where mental illness and chronic pain are the one and the same), because I know so many people with mental illness, all of whom are bad-arse heroes, none of whom are like the characters in the books I read. We are all strong people who have saved and are saving ourselves, who figure ourselves out and get on with life as best we can, who learn so much more about ourselves and what ‘sanity’ really means than the so-called ‘sane’ people (even if it means starting from a place of utter collapse), and this is the arc I want to see in fiction. I want to see people with disabilities being amazing people who exist as far more than as an object for the able-bodied to rescue, who are living the challenging, honest reality of their lives in all its mingled beauty, ugliness, enlightenment and despair.

I introduce you to one Oscar Stillwater, a chronic-pain-suffering, crazy bigender person trying desperately to save the world and somehow not fuck herself up too much in the process. 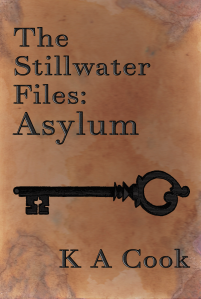 Note: This book has been written in present tense. If this bothers you – well, I’d be grateful if you bought this book anyway, but I’m entirely understanding if you don’t.

Credits: Map by Dylan Marshall of The Writings of a Mad Mental Adventure. Cover typeface Theano Didot by Alexey Kryukov. Vintage key graphic sourced from The Graphics Fairy. Thanks to Melody Soan, Janet Stapleton, Craig Henderson, M. Hart and Tracey Rolfe, among others, for thoughts, feedback and opinions – and to James of Rotunda for being an epic first reader.

Blurb: She is Oscar, the Oscar that would not have been if Amelia did not die.

For the dream of living in a world where love is not a crime, Lord Oscar Stillwater stole her dead brother’s name, clothes and title, pouring his wealth and her sanity into the creation of a sanctuary where the queer convicts of Southport can live in peace—and plot glorious revolution.

Oscar’s lover, Sydney Cliffhall, is forced to watch as the person she adores throws away her life and health in the desperate, maddened pursuit of a dream that cannot be, but what can one whore do to rescue a psychiatrist who refuses to admit her behaviour is anything close to self-harm?

Isabelle Chandler rots in Southport’s jail with no trade, no family and no future beyond enduring predation and degradation, all for the crime of loving another woman. Oscar can offer her a chance at freedom and something even stranger, if Isabelle can learn to trust her. Oscar just has to convince her without arousing the suspicion of two curious prison employees … or angering Sydney.

The Stillwater Files is an episodic series exploring what it means to be queer and gender non-conforming in a world even bleaker than our own—and what people will risk to change it.

A note on content warnings: Asylum contains references to and/or depictions of depression, anxiety, PTSD, chronic pain, suicidal ideation, self-harm, attempted suicide and/or self-harm (depending on where said characters stand on this issue), mental illness in general, drug use and/or abuse (depending on where said characters stand on this issue) family dysfunction, homophobia, transphobia, misogyny and misogynistic slurs, gender essentialism, binary-centrism, sexism, rape culture, trauma, flashbacks, sexual assault, revolution, imprisonment, violence, threatened sexual violence, threatened violence. It is about positive mental illness treatment and portrayals in a world where this isn’t the status quo, trauma recovery, the up-and-down mind-fuck that is life with chronic pain, the uncomfortable reality of rape culture and misogyny (and a lot of things conventional speculative fiction likes to overlook) , the uncomfortable reality of non-binary and transgender queerness, and the horrible things that people manage to inflict on those they care about in the name of love.

It triggered me to write and proof at times, so I’m going to say that it is hellish fucking triggering, and even if I write this in my best attempt at tackling these themes in ways that challenge or twist mainstream views, or validate the experiences and emotions of minority peoples, that doesn’t make this story not triggering. Both bad guys and good guys say some horrific, unforgivable things that put sympathetic characters into what the fucking hell, hero territory, and there is a lot of well-intentioned-but-epically-not-helpful commentary made by people who love Oscar so very much but do not understand how to support her. (No real-life experience there. Nope. Not at all.) Good characters are supposed to be flawed – and good characters are supposed to be showing the ugliness that comes when cracking under stress.

Genre: Think steampunk that’s mostly gritty psychological realism invested in showing the extreme edge of the ugliness we overlook in modern-day society, with a dash of  flawed queer people with mental illness being heroes and having to live through the consequences of being these things, and that’s Asylum.

(And for those who want to see slightly-less gritty realism with characters who are kinder to each other, including a main pairing who define what I think familial love and compassion should be, be patient: that’s what my new novel is all about.)

One thought on “Launch: The Stillwater Files: Asylum”