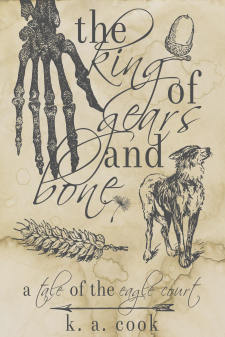 In a nation of liars, an honest man cannot rule.

Einas ein Iteme knew he wasn’t a princess. That first truth provoked violence, murder and war, leaving him the heir to the throne of Ihrne—a throne he doesn’t want and can’t hold. How can he when he struggles to put words together, won’t look courtiers in the eye and avoids people on general principle? Yet the Eyrie, even Zaishne, simply assumes Ein will find a way to become the allistic ruler he can never be.

When his brother Paide invites him to a private discussion, Ein sees a chance to voice the second truth. Paide, though, keeps secrets of his own—and doesn’t seem to recognise the fate bound to him by hundreds of devouring angels.

To begin to save Paide’s soul, Ein will have to learn what the world never stirred itself to teach: trust.

Master Page: The Eagle Court | Beginning: Their Courts of Crows | Previous: A Prince of the Dead.

Please note that The King of Gears and Bone explores familial abuse, so I recommend reading the included content advisory if this might be a concern.

The King of Gears and Bone takes place in the evening of the same day as A Prince of the Dead. This is also the book that gives some explanation as the reasoning behind Ihrne’s names, along with more detail on Ihrne’s religion and the Convocation’s relationship with their necromancers. Curious fact nobody asked for: there’s no such thing as a shroudname in Ihrne, and I should write a short side fic where Amelia and Kit learn that everybody they’ve met in Ihrne has just given a witch and a magician access to their real names.

(Yes, a good magic worker can get around that, but you don’t go and make it easy for somebody to enchant you, ye gods…)

Writing Ein feels like coming home in ways both horrific and wonderful. I’ve wanted to write for some time an antagonist like Zaishne – a mother who loves, unquestionably, both her children. Unfortunately, she’s so much better at love’s grander gestures, like armies of bones and the selling of souls, than she is at love’s smaller acts of intimate compassion, and her inability to understand the damage she has wrought on both Ein and Paide will be a long-running problem, personally and politically. This is so much truer to my own experience, in that people who have hurt me have often cared about me to varying extents, and a shadow who wounds in the name of love is so much harder to understand and face than a monster who only hates and destroys.

I’m not looking to write any real “evil” person in the Eagle Court stories. Just a hundred thousand greys of people acting in what they believe is the best interests of the people they care about.

I will say, though, that I’m really enjoying this writing of stories about connection, intimacy, sharing and love that aren’t in the least bit romantic. It makes my aro heart so happy.

My next piece will have to be the next Kit March chapter, but after that I’m feeling Truth of the Eyrie. Since my brain tends to pick up and drop things with no real consistency, though, chances are very good you’ll get something else entirely.