You can tell my updates here have become infrequent at best: I’m using the same header title as I did for a fiction collection post spanning the same three-month period last year. I’m also posting this at the end of October…

This is, in part, what’s lead me to rework my online presence. Most of what I’m writing/creating is connected to my aromanticism, so it goes up on Aro Worlds. That’s also the name of my Patreon, one of my Tumblr accounts and the Twitter account I forget to use for anything more than automated content promotion. You see where I’m going with all this? It was becoming absurd to treat my Aro Worlds site as a secondary home, because it’s not. For better or worse, this has become my main online identity. For better or worse, aromanticism has nudged in front of my genderlessness in terms of issue in focus. Nor do I have the ability to focus on more one subject at a time, thanks to limited spoons.

So, while this website lies buried under cobwebs and dust bunnies, aroworlds.com is now a more-updated archive of my (aro) books, cross-stitch patterns, posts and resources for allo-aros.

I’ve updated the book pages here for anyone following older links, and I have no plans to delete this site. I’ll stress, though, that if you don’t want to wait three months to find out what I’ve been creating, and you don’t object to following an autistic, genderless queer who shines a little more light on hir aromanticism (but never stops talking about neurodiversity and disability), you’re best to follow me in the land of greens and golds.

I’m currently preparing content for @aggressivelyarospec‘s Aggressively Arospectacular 2020 event in November: fiction, cross stitch pieces, patch patterns, an icon set, a new fiction collection and a jacket covered with my cross stitch patches. I’ll admit to not knowing if I can accomplish all these things in time (four posts are queued, the more involved three are in progress), so there’s a good chance of glorious failure! 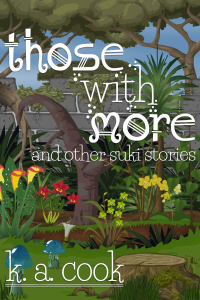 Suki Lewis has always known what she wants–or, more correctly, what she doesn’t want. She also knows that a good woman of Freehome, deserving of her mother’s uncritical love, wants something she can’t fathom or mimic: a stable, lasting romantic relationship.

She can’t safely stay, but leaving means surviving the challenges of priesthood, her mother’s abuse and the belated finding of a name for her differences: allosexual aromanticism.

I recommend having read What Makes Us Human before starting the eponymous (final) piece in this collection, but the first three stories stand on their own (when read in sequence).

Suki has become one of my favourite characters, mostly because she’s the expression of a direct, blunt, passionate honesty. Giving her community, duty and purpose gives me hope that I can find the same for myself, even when people call me “abrasive” when I insist that my identity be respected and “aggressive” when I stand up against antagonism. She’s battered, she’s flawed, she’s bitchy–and she works, over a lifetime, to find a balance between owning that and letting others see the other shapes of her personality.

Suki is permission for my fellow allo-aros to shrug off accusations of “aggression” and demand our safe, equitable inclusion while also recognising and honouring our need for emotional support.

Individual stories: Abrasive | The Complexity of Human Decency | If Absurd Works | Those With More.

Kit can’t find anything unfair about the contract or the man, so why is the ring so heavy?

Kit March is a signature away from marrying the man who loves him. He should be delighted, but for reasons he doesn’t understand and can’t explain, his future with Lauri weighs upon him. What is a magician to do when no script extant has words for the confusion he feels?

I’ve updated and polished this story a little, in the process of moving content over to my other site. It’s not that different! I’ve just fleshed out Kit’s background and showed more of his thought processes and relationship to the particular kind of amatonormativity experienced by allo-aros.

We don’t talk enough, I think, on the complexity of experiencing something society assumes we possess–sexual attraction–while not possessing the accompanying shape of romantic attraction required for this sexual attraction to be socially acceptable. If we allo-aros seek to explore and express our allosexuality, we are mistaken for allosexual allomantics. We mistake ourselves for them. How do you conceptualise this fundamental truth without a-spec language? How do you escape the trap of feeling like the only options are to withdraw from relationships or perform romance? I don’t know, and neither does Kit.

If this story offers confusion without resolution, to me that is the ultimate allo-aro experience!

Four months ago, Kit March abandoned his fiancé without even a note of explanation for a deserving man.

Leaving Lauri should have freed him from the pressures of romantic expectation, so how does a talented magician end up performing flash magic for buttons and hairpins in Raugue’s worst tavern? Kit doesn’t know and doesn’t care, as long as he can keep drowning guilt in beer and spellworking. As long as he can keep not thinking!

When a stranger offers the word “aromantic” followed by an opportunity to join a dangerous quest to the Gast, Kit may have more distraction than he can survive—and more comprehension than he can navigate.

This is the first chapter of my Esher Hill serial repackaged into its own story, since I am not speedy in finishing  the prelude/prequel stories I need finished to continue. (2020. Enough said.) This too has been reworked a little, but, like Ringbound, it isn’t substantially different.

The stories I’ve written and reworked over the last few months–Suki and Kit–feature allosexual aromantic protagonists of the “not interested in any permanent relationship, let’s just have casual sex” kind. (Contrast with Mara’s marrying Benjamin, or Darius’s array of relationships with Efe, Aysun, Akash and Ila.) Part of me revels in writing stories about characters considered less acceptable portrayals of allo-aro (Suki and Kit are closer expressions of me, relationship-wise, than Mara or Darius), but part of me fears accusations of problematic characters or the use of my characters to justify or reinforce antagonistic stereotypes. Even some advice about writing allo-aro characters directs against allo-aro characters who “only sleep around”!

Embracing my status as A Proudly Problematic Allo-Aro gives me the courage to write and post anyway, but it doesn’t lessen my fear and frustration.

Thank you for reading! If you still follow this site despite my posting rate of four times a year at best, let me express my awed respect for your support and loyalty!