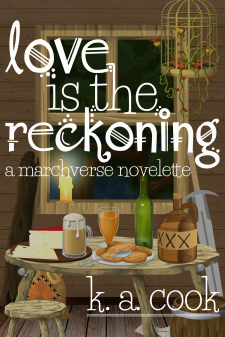 The fifth Mara and Esher Hill story. Love is the Reckoning takes place nearly three years after The Sorcerous Compendium of Postmortem Query and a month before The Crew of Esher Hill.

Esher Hill left his home and kin a crying wreck of a man, too depressed and dysphoric to care what his people make of him. If he’d had his way, that would have been the end of it.

His sister Mara, the village witch, made sure he didn’t.

Two and a half years later, Esher owns two dogs, a blade, a career and a new body—the shape of masculinity he always felt he should be. A miracle Mara refuses to explain. A miracle the Sojourner’s priests reject and fear. A miracle, say the Grey Mages, that cannot exist without something precious sacrificed in exchange: a soul.

Returning home in search of his sister and the truth isn’t just a matter of enduring stares, whispers, explanations and the condescending pity from those he left behind.

Love holds edges sharper than Esher’s sword, for nobody wins but demons in the sale of souls.

Contains: A graysexual, aromantic trans man fighting his own mind; the trans sorcerer of a sister who loves him; a grizzled aro-ace mayor and barkeep; and a heavy reliance on schemes and manipulations in the absence of simple communication.